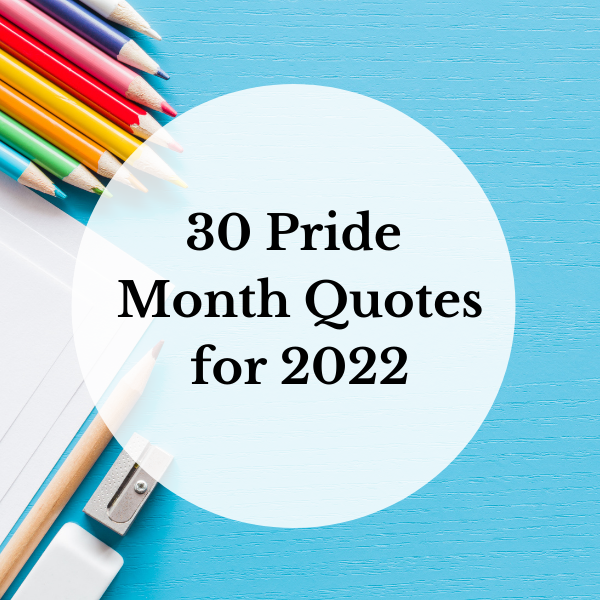 In this post, you’ll find 30 Pride Month quotes for 2022! Pride Month happens each year during the month of June. By honoring Pride Month, your company will send an important message about its values to employees and the community.

This year, as part of your commitment to diversity, equity, and inclusion, share the Pride quotes below on your company’s social media channels or in your e-newsletter. You can inspire and enlighten your audiences while also starting an important dialogue. Sharing these quotes will also help LGBTQ+ clients, employees, and stakeholders feel seen and welcomed.

As you share these Pride Month quotes, remember to also take meaningful action to support the LGBTQ+ community. Consider planning a volunteer day, supporting a nonprofit serving the LGBTQ+ community, or advocating for legislative change. After all, actions speak louder than words – and sharing quotes is just one part of a meaningful Pride campaign!

Looking for an educational and fun way to celebrate Pride Month with your team? Check out our “Pride is Protest” virtual team building experience, with two live-streaming guides and a look at iconic locations in New York and San Francisco. 1. “It is revolutionary for any trans person to choose to be seen and visible in a world that tells us we should not exist.”

2. “Do not allow people to dim your shine because they are blinded. Tell them to put on some sunglasses, because we were born this way.”

3. “There will not be a magic day when we wake up and it’s now okay to express ourselves publicly. We make that day by doing things publicly until it’s simply the way things are.”

5. “Of course, attitudes change, but only because brave people like Ellen [DeGeneres] jump into the fire to make them change. And if I hadn’t seen her on TV, I would have thought, ‘I could never be on TV. They don’t let LGBT people on TV.’ And more than that, I would have gone on thinking that I was an alien and that I maybe didn’t even have a right to be here.” 6. “It takes courage to grow up and become who you really are.”

7. “People used to think I was a monster. And for a long time, I believed them. But after a while, you learn to ignore the names that people call you and you just trust who you are.”

8. “To be yourself is truly a revolutionary act. And I think more and more people should try it, because it’s gotten me a pretty cool life.”

9. “Never allow yourself to be made a victim. Accept no one’s definition of your life; define yourself.”

Pride Month Quotes on Coming Out 10. “The single best thing about coming out of the closet is that nobody can insult you by telling you what you’ve just told them.”

11. “How can people change their minds about us if they don’t know who we are?”

12. “Personally, coming out was one of the most important things I’ve ever done, lifting from my shoulders the millstone of lies that I hadn’t even realized I was carrying.”

13. “Owning our story and loving ourselves through that process is the bravest thing we’ll ever do.” 14. “I believe that marriage isn’t between a man and a woman, but between love and love.”

15. “We deserve to experience love fully, equally, without shame, and without compromise.”

16. “Self-love means that I have a relationship with myself built on trust and loyalty. I trust myself to have my own back, so my allegiance is to the voice within.”

17. “To be fully seen by somebody, then, and be loved anyhow – this is a human offering that can border on miraculous.” 18. “The more I’ve been able to learn about gay rights and equal pay and gender equity and racial inequality, the more that it all intersects. You can’t really pick it apart. It’s all intertwined.”

19. “We cannot be antiracist if we are homophobic or transphobic… All Black lives include those of poor transgender Black women, perhaps the most violated and oppressed of all the Black intersectional groups.”

20. “It is important and vital is to keep that education for critical consciousness around intersectionalities, so that people are able to not focus on one thing and blame one group, but be able to look holistically at the way intersectionality informs all of us: whiteness, gender, sexual preferences, etc. Only then can we have a realistic handle on the political and cultural world we live within.” 22. “Being transgender is not just a medical transition. It’s discovering who you are, living your live authentically, loving yourself, and spreading that love towards other people and accepting one another, no matter the difference.”

24. “It is time that we all see gender as a spectrum instead of two sets of opposing ideals.”

25. “Gender is not what people look like to other people; it is what we know ourselves to be. No one else should be able to tell you who you are; that’s for you to decide…Man and woman are two of many – stars in a constellation that do not compete but amplify one another’s shine.” 26. “No person is your friend who demands your silence, or denies your right to grow.”

27. “Being an ally can’t just be about nodding when someone says something we agree with – important as that is. It must also be about action. It’s our job to stand up for those who are not at the table when life-altering decisions are made.”

28. “When we’re free to love anyone we choose, when this world’s big enough for all different views, when we all can worship from our own kind of pew – then, we shall be free.”

29. “…there is a subtle difference between tolerance and acceptance. It’s the distance between moving into the cul-de-sac and having your next door neighbor trust you to keep an eye on her preschool daughter for a few minutes while she runs out to the post office. It’s the chasm between being invited to a colleague’s wedding with your same-sex partner and being able to slow-dance without the other guests whispering.” What is Pride Month?

Pride Month is a time for the LGBT community and allies to come together in celebration, solidarity, activism, reflection, and support of all LGBTQIA+ people (lesbian, gay, bisexual, transgender, queer, intersex, and asexual).

While a Pride Parade or Pride March are often part of Pride celebrations, there’s more to this holiday than parades! Pride can be a meaningful time to learn about the historical and present struggles and exclusion of LGBT people.

When is Pride Month?

Where is Pride Month celebrated?

Pride Month is primarily celebrated in the United States. However, you can find Pride Month festivities around the globe – even in areas where it is not an officially recognized occasion.

How did Pride begin?

Unfortunately, during this time, being gay was a criminal offense. In fact, it was illegal to serve alcohol to a gay person until 1966. Raids on gay bars were standard procedure, but this raid would go down in history as the birth of the Pride movement.

Led by courageous transwomen, people at the Stonewall Inn protested the raid, leading to a six-day-long resistance. By just the second evening, thousands of protestors had gathered. Confrontation, violence, and escalation ensued for nearly a week. In the aftermath of Stonewall, many people became more engaged in activism and advocating for the equal treatment for LGBT people.

Learn more about the Stonewall Uprising from the Library of Congress.

We wish you and your team a safe, happy, and celebratory Pride! Looking for more Pride Month activities and ideas? If so, explore our guide, 16+ Pride Work Ideas for 2022. Or, book our Pride Month virtual team building experience!